To pursue creative musical projects, one needs two things: ambitious plans and ambitious musicians able to fulfil them. Jan Stanienda, a virtuoso violinist and prominent concertmaster, made sure he had both of these when in 1996 he decided to bring to life the new Wratislavia Chamber Orchestra.

The musicians whom he picked very carefully had already been known as winners of musical competitions, professors of musical academies, and artists welcomed in other excellent ensembles. It is enough to name some of the orchestras they played with (such as Sinfonia Helvetica and Menuhin Festival Orchestra), or some of the great names with whom they gave concerts (Grzegorz Nowak, Krystian Zimerman, James Galway, Sharon Kam), or famous concert halls in which they performed (Suntory Hall in Tokyo, Waterfront Hall in Belfast, Symphony Hall in Birmingham, Berliner Philharmonie, Beethovenhalle in Bonn, Philharmonie Gasteig in Munich). Indeed, Wratislavia has been having a huge musical potential since the very moment it was born.

And as a small cherry on top of all that, Wratislavia participated in creating the musical setting of the 1996 Summer Olympics in Atlanta, as well as of the inauguration ceremony of the 46th Eucharistic Congress in Wrocław, 1997, in the gracious presence of Pope John Paul II.

The Orchestra has not been merely a follower of the plans of its creator and director. The ensemble have dreamed up and became the host of a new original cultural event, which since 1997 has become a fixed part of the musical calendar of Wrocław – the annual Chamber Music Festival Arsenal Nights. The festival which binds in a unique harmony the refined tastes and exceptional performances of world’s chamber music, with the architectural beauty of the magnificent relic of ancient city armoury in Wrocław.

The Orchestra’s broadening contacts, growing with each concert along with the brand name which Wratislavia has became, resulted not just in many new concert performances with acknowledge masters of world’s classical music, but also in several interesting recordings. Of these, three CDs gained prestigious awards or nominations: the album Haydn, Denisov – Cello Concertos with Marcin Zdunik (cello), awarded with Fryderyk 2010 (Polish top musical award). The record Polish music nominated to Fryderyk 2002. The record La Streghte 2 with Katarzyna Duda, nominated to Fryderyk 2001. The Orchestra has also given premiere concerts of many works of contemporary Polish composers, and many studio recordings in Polish national TV and Radio. 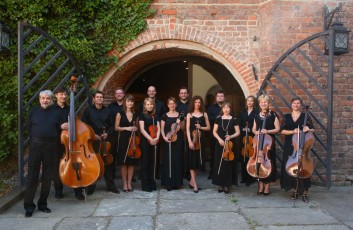